So what’s with the Buffalo?

via The Scoutmaster Minute by tbirdironchef@gmail.com (Jerry) on 12/13/08 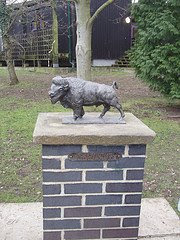 A week or so ago, I was asked to participate in a “Trivia Contest”. This was a unique contest as it was to be part of a Scouting Podcast called The Leaders Campfire, hosted by Cubmaster Chris and his sidekick Scoutmaster Steve.
Steve played the role of “Game Show host” and the contestants were, Shawn (Commissioner’s Corner), Chris (Leaders Campfire), a fellow names Michael who is a Scout leader in New Zealand, and me.
The game was based on knowledge gained from the 1986 Boy Scout Handbook. Now I thought I had this licked as I remember most of what I was taught as a Scout in the 80’s. But as the game progressed the chap from New Zealand pulled ahead with amazing aptitude about the Boy Scouts of America.
There were categories such as Scout craft/skills, citizenship, and communications, and more.
We got to a question in the citizenship category that asked what our National Mammal was?
Michael shouted his name and answered…”THE BUFFALO”!

He is right. Now how many of you knew that?
But here is an interesting side note about our National Mammal as it pertains to Scouting.
I am sure you all know about our Nations Highest Scouting recognition.. the SILVER BUFFALO award.
But did you know that in Gilwell Park, just outside of London, The Buffalo Lawn is so called because of the replica of the Silver Buffalo award that was presented to the Boy Scout Association by the BSA in 1926. This was to honor the Unknown Scout that helped William D. Boyce bring Scouting to the United States. The Buffalo Statue was originally mounted on a large tree stump. The stump has been replaced by a brick pedestal. The inscription reads: “To an Unknown Scout Whose Faithfulness in the Performance of the Daily Good Turn Brought the Scout Movement to the United States of America.” The First presentation of the Silver Buffalo award was in 1926, the same year the statue was presented to Gilwell. And not so oddly enough it was presented to Lord Robert S.S. Baden Powell, founder of the Scouting Movement and Chief Scout of the World.
Since then the Silver Buffalo has been presented annually. As of 2008 674 men and women that have made noteworthy and extraordinary service to youth on a national basis, either as part of or independent of the Scouting program have received the Silver Buffalo award. 13 of which have been Presidents of the United States. The First President to be presented the award was William Howard Taft in 1927. Of note, that same year Brother Barnabas McDonald, the founder of the Columbian Squires of the Knights of Columbus also received the Silver Buffalo.

The Award is representative of all that is good in America. The buffalo, a strong animal that is far ranging and able to withstand harsh weather and adapts to changing conditions. This is as American an animal as we can get.

So what’s up with the Buffalo? It’s the Boy Scouts of America’s highest recognition, but it is as world wide as Scouting itself.
I learned a lot playing our little trivia game, there is so much neat stuff to know and pass on in Scouting. Aside from first aid and knot tying, there is much that we can learn and share.